News from the CONMAR project

For the first time, the CONMAR consortium met after one year of operation. From 12-13.12.2022, about 30 CONMAR members came together to present and discuss the results udn project progress of the last year. The meeting was hosted by CONMAR partner the Global Climate Forum in Berlin. A big thank you to all participants for coming and for the fruitful exchange. 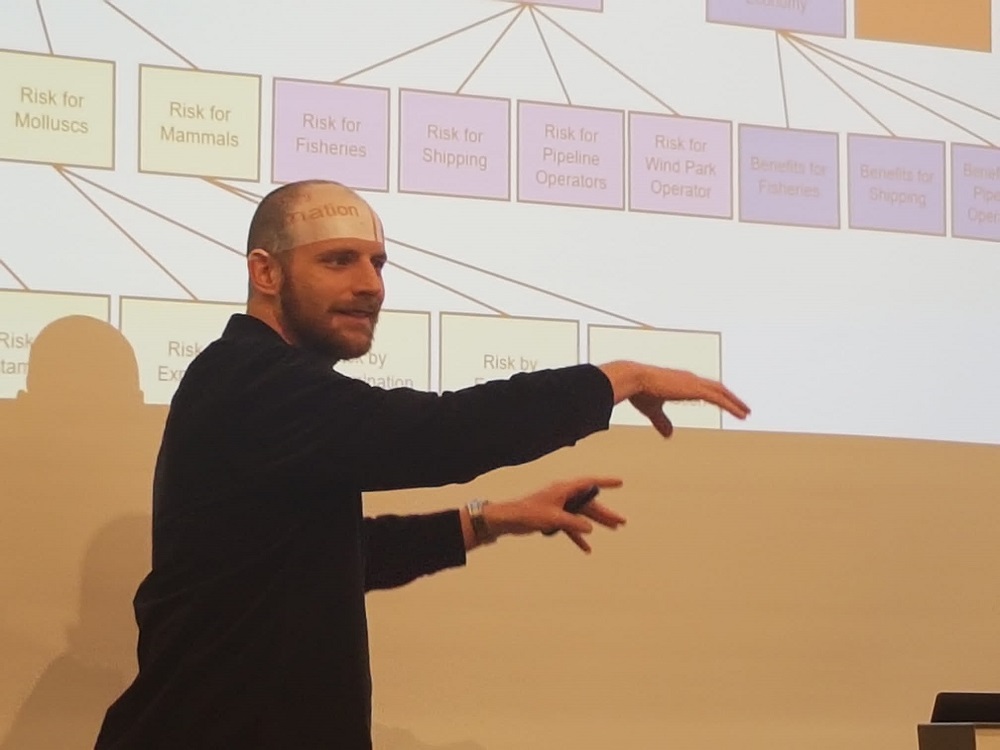 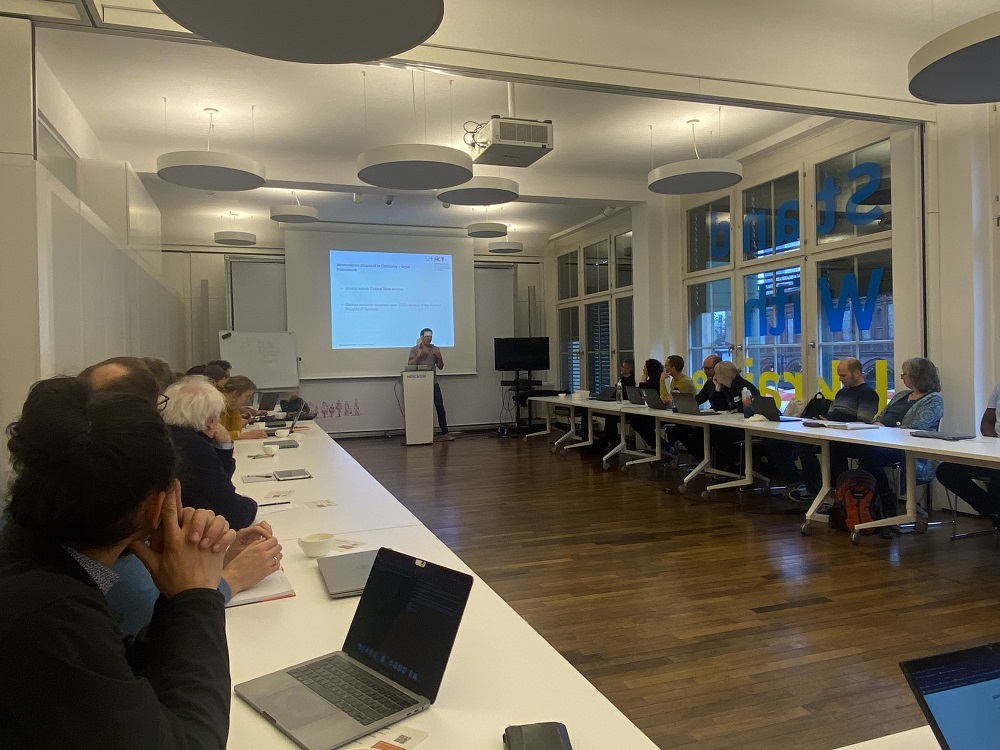 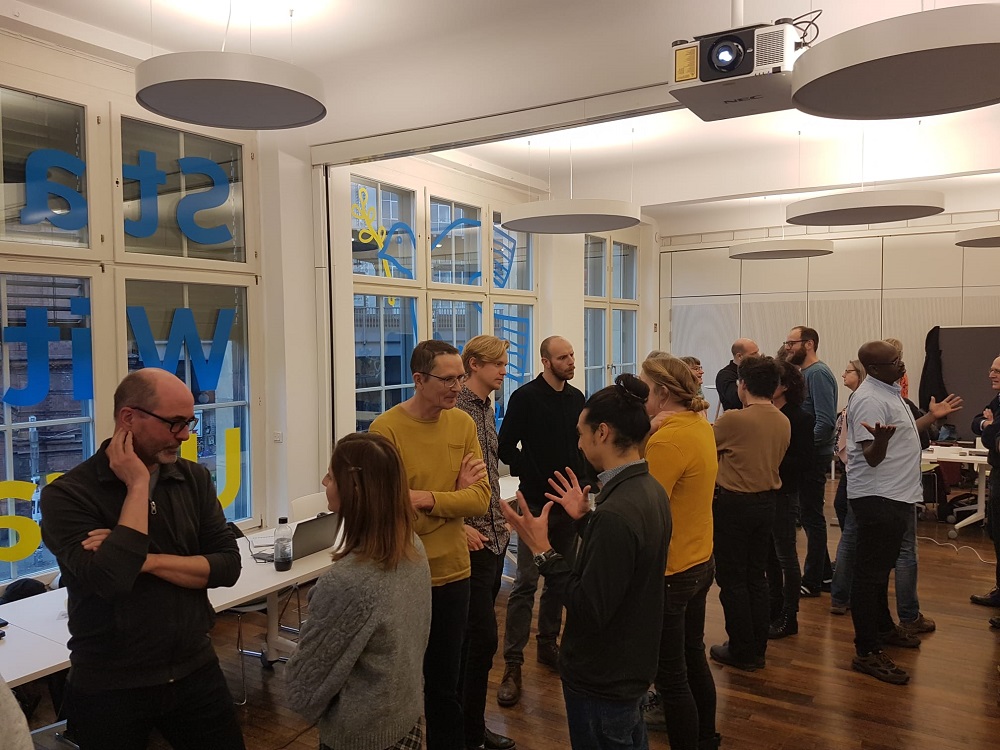 From 24.-31.10.2022 a team of technician, engineers and researchers the GEOMAR Helmholtz Centre for Ocean Research Kiel and the Senckenberg am Meer Marine Research Institute joined a cruise (AL583) to the Western Baltic Sea on RV #ALKOR. In the framework of the projects BASTA, CONMAR and ExPloTect, we successfully continued our multidisciplinary research concerning marine UXO and explosive compounds detection methods. For the first time we achieved that our backseat driver algorithm of Girona500 AUV "Luise" successfully managed to autonomously locate and examine an individual UXO object solely based on in-situ magnetic anomaly detections. Regarding the biochemical research, dozens of van Veen grab samples were collected inside and outside of munition dump sites. CTDs were run at more than 50 stations along the coast at various depths.The analysis will help to answer, inter alia, the following questions: What influence do munition compounds have on the species diversity and abundance of the benthic fauna in the Baltic Sea? Which munition compounds can be detected where and in which concentrations? Do the compounds accumulate in the sediment? 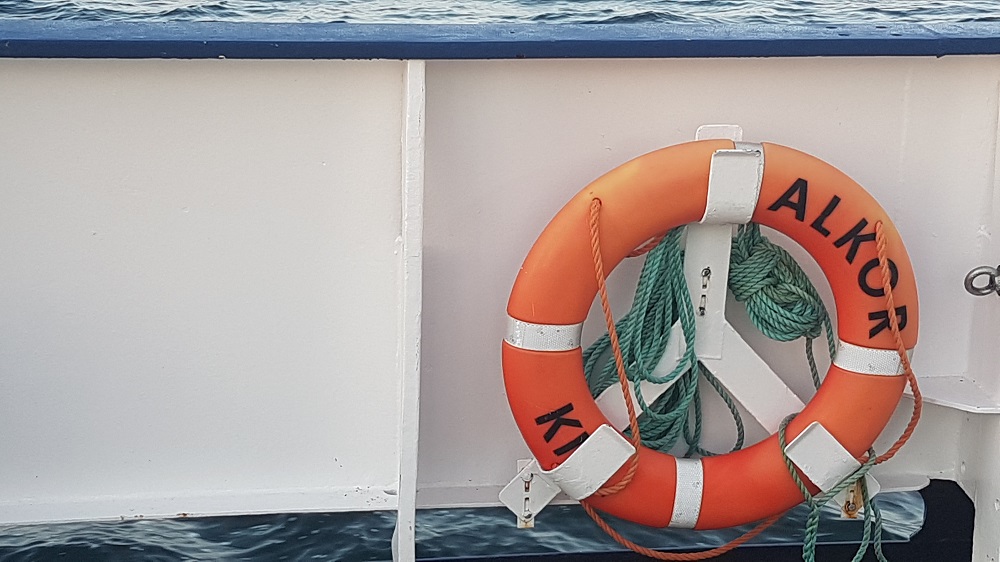 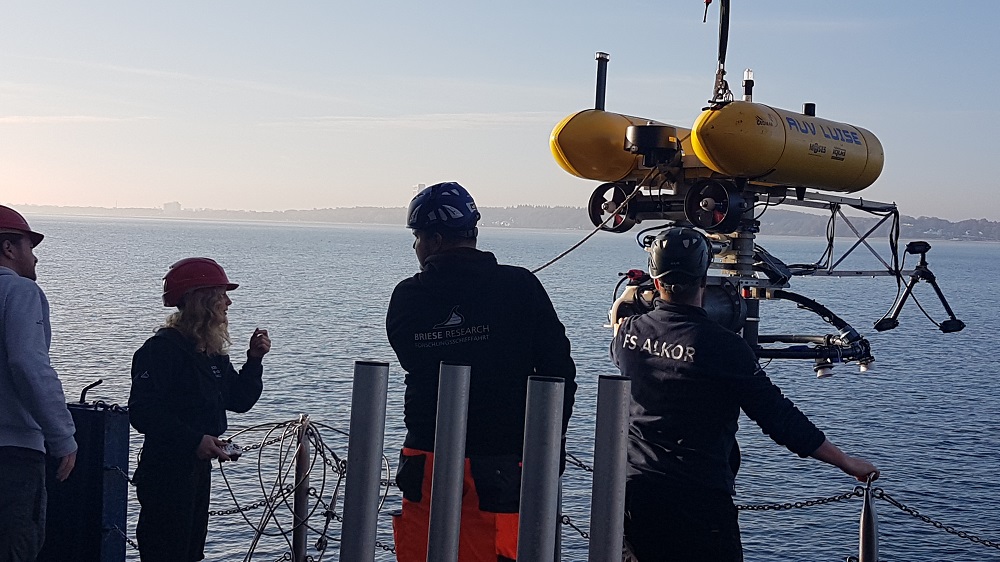 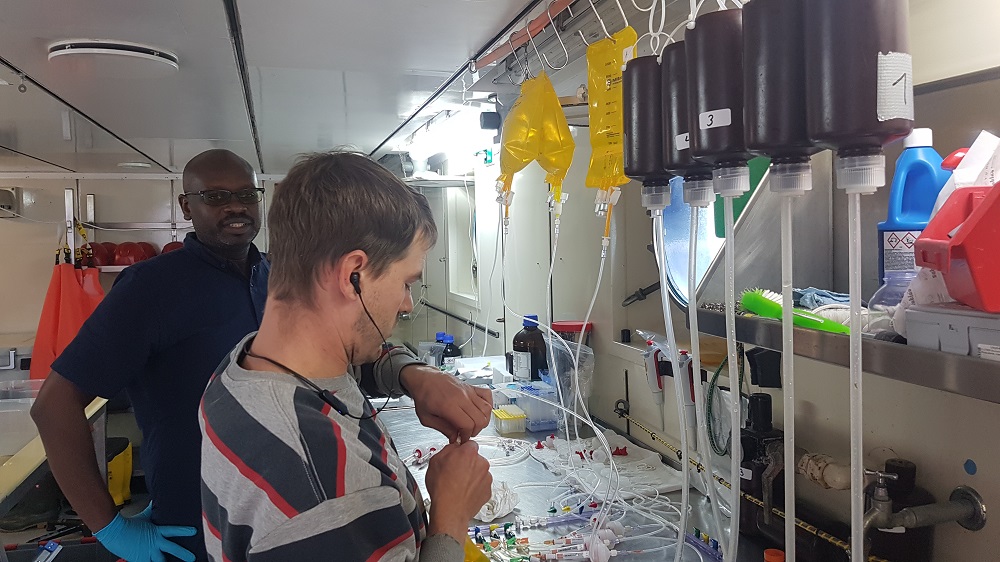 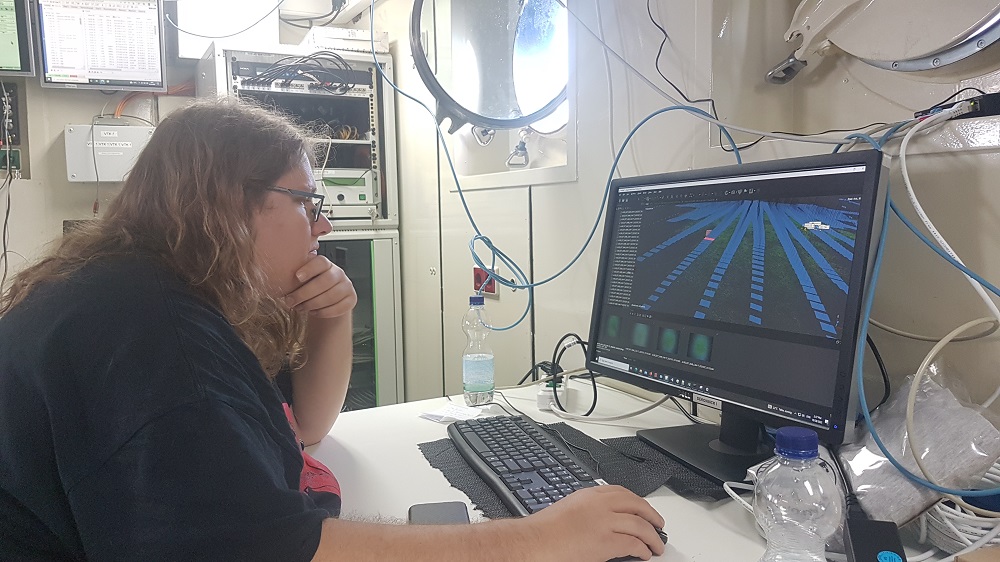 After the first autumn storm delayed the departure by two days, the North Sea Wreck (NSW) team set out together with arte for the last project trip to the German Bight. The targets were WW1 wrecks, including a minelayer submarine (UC30) off Esbjerg and two light destroyers, SMS ''Mainz'' and SMS 'Ariadne', both sunk west of Helgoland. Followed at every turn by the arte camera drones and microphones, the team was able to sample water, sediment and fish at the UC30, but failed to produce video footage with the ROV. Reason: the current around the wreck was simply too strong to keep the ROV on course. Under time pressure water samples could still be taken at 'Mainz' and 'Ariadne'. However, the fishnets on the Ariadne were completely empty. Only one dab could be caught by the NSW team for their investigations. But the ROV remains on board and the colleagues from ICBM Oldenburg want to start further attempts to film the wrecks in the next leg of the cruise. We are excited and keep our fingers crossed 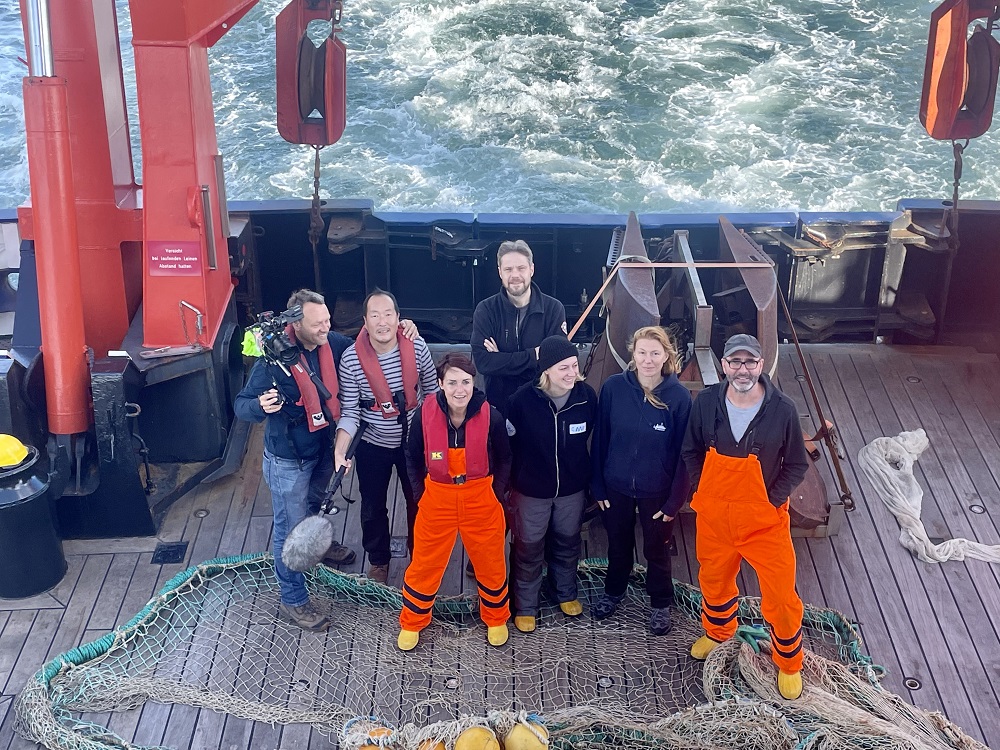 Munition in the sea - state of affairs and perspectives

Together with DAM (German Alliance for Marine Research), we have produced a German position paper on the state of knowledge and the possible future of munitions in the sea. With this, we want to inform politicians and other decision-makers and offer insights into possible solutions to the problem. Read it here (sorry, only available in German):

Munition in the Sea on the political agenda

The two members of the Bundestag Mr. Sönke Rix and Mr. Mathias Stein informed themselves today at GEOMAR among other things about the problem of munition in the sea and the status quo of research. 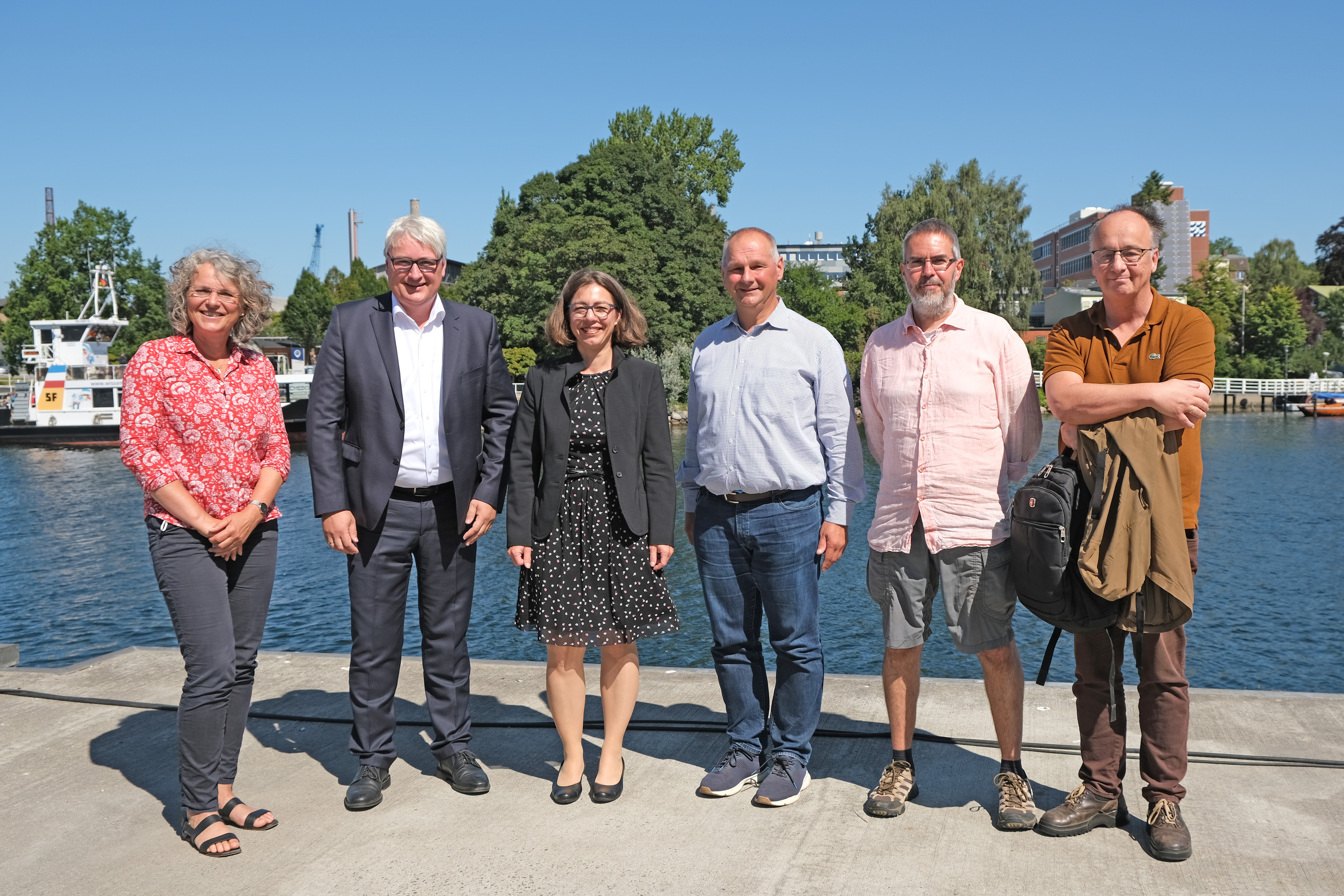 One important aspect of solving the issue of munitions in the sea, is the collaboration between scientific institutions, private companies and other stakeholders. To further strengthen these connections and to inform German parliamentarians, Fraunhofer IGD invited members of the German Bundestag, CONMAR members and other guests to an informative evening in Berlin. The event was opened by a keynote from Claudia Müller (Federal Government Coordinator for the Maritime Industry and for Tourism). Presentations on the role of the expert group Munitions in the Sea (Dr. Johannes Oelerich, MELUND), on the German navy's capacities (Flottillenadmiral Jürgen zur Mühlen), on the private industries' capabilities and technological gaps (Jan Koelbel, STASCHEIT Kampfmittelräumung GmbH) and on applied science requirements (Prof. Uwe Freiherr von Lukas, Fraunhofer IDG) informed the audience on what is needed for a successful upscaling of maritime explosive ordnance disposal. Food and drinks were generously offered and the ensuing lively discussions on the way forward were sparked by the presentations, making this evening an interesting and successful one for all the participants.

The issue of ammuntion in the sea is receiving more and more attention all over Europe. To present the research that was done in Germany over the past years and to moderate a panel on the topic, I travelled to the European Maritime Day (EMD) event held in Ravenna, Italy. To make sure the perspective of the military and the relevant private sector industries on the topic were represented as well, we invited Catherine Warner (NATO CMRE) and Dieter Guldin (SeaTerra GmbH) to join our panel. This way, we were also able to cover the Baltic, the North and the Mediterranean Seas. In an one hour session, we offered a brief look at the problems related to the munitions and an extensive overview of the potential solutions. The entire session was recorded and can be viewed in the video below.

Today, as part of the CONMAR project, I had my first trip with a research cutter. After a corona test and a safety briefing, the Senckenberg left Wilhelmshaven at 8AM. At this trip we traveled until Wangerooge, including strong swell and a delicious lunch. According to research, there are about 600,000 tons of munition in this area. We went to a total of eight measuring stations, where we took water and sediment samples. These are now subsequently being analyzed for explosive-type compounds, pollutants, and TNT. This will provide information on the environmental impact of contamination from dumped munitions, which in turn will provide information on management strategies for dealing with these munitions. In addition, the samples will be used to build a database of marine bacterial populations for the sister project CREATE. The field trip was a lot of fun and gave me, as a social scientist, an excellent insight into the working procedures of my natural science colleagues from CONMAR and CREATE. 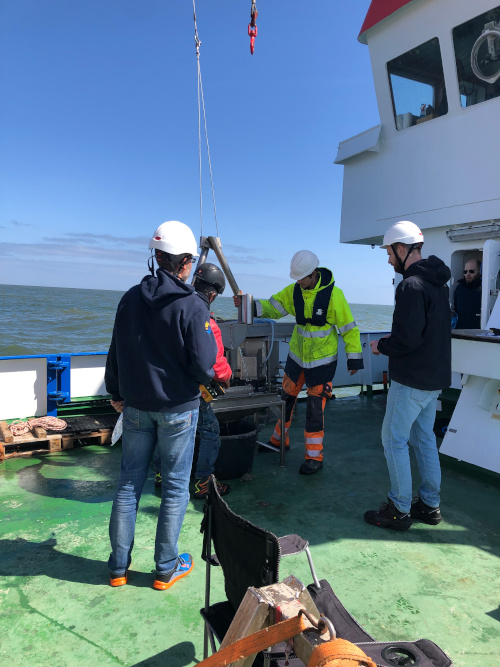 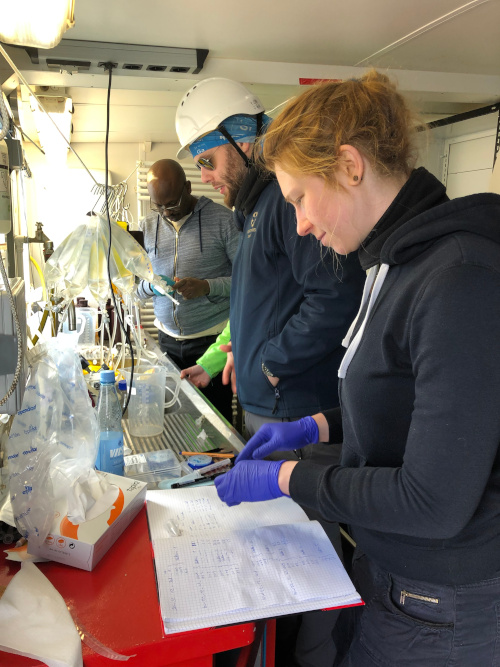